I have been driving for Metro for about a year and a half now, Love this job. Driving has always been fun for me, and adding on the parade of people on a daily basis in a large beautiful city like Seattle, is the extra foam on my Macchiotto. Thank you for dropping by…. I hope you enjoy these stories as much as I do. 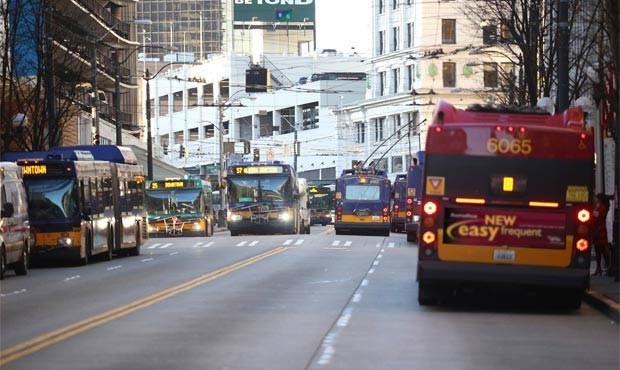 Three afternoons a week 3rd and Pine is my bus stop to load Orca cards, I watch people come and go, and have come to regard this as “the Parade”. Friday as I arrived a homeless man had been sleeping on the sidewalk for a reported 3 hours, a puddle of Urine had started to leak out from beneath his pack….I called it in , a supervisor arrived and let me know they had moved this guy earlier that day.
At the crosswalk another man was pushing his wheel chair that had run out of power, I ran over to help him out of the street .. he had been pushing it for a few blocks with no where to plug it in to get a quick charge and no one helped him, as I got him off the street he was so out of breath he could hardly speak, I pushed his chair to his shelter… The Police and Aid cars were busy at the McDonalds entrance with a person that overdosed…..
There were a small herd of pigeons picking at food droppings, one of the smaller ones only had a stump for a leg, no foot and painfully hobbled, came across a crumb and was pushed away by a bigger healthier pigeon….
A retired couple from Czechoslovakia asked me for directions to the Museum of Flight…… they loved Alaska and were looking forward to seeing more of Seattle until they flew into New York to visit relatives……… A woman of plus 70 with a cane gave a young 20s girl some kind of muffin from her bag….. Young lovers met there after work embraced as though it had been days, a bicyclist with a speaker turned up too loud rode by too fast bumped a young mans pack, skidded to a stop and apologized…… another man that resembled the guy that plays aqua-man had a huge Newfoundland, black with paws larger than my hands were getting attention and praise…….
a Seagull dropped his mark next to a small group of Chinese women that made them laugh as they stepped back…..
This was about 45 mins on Friday.

I have been driving for Metro for about a year and a half now, Love this job. Driving has always been fun for me, and adding on the parade of people on a daily basis in a large beautiful city like Seattle, is the extra foam on my Macchiotto. Thank you for dropping by…. I hope you enjoy these stories as much as I do.

He’s either foolish, or really good with that thing

As I took a right to continue down 3rd to reach Main street, a younger Asian male, 35-40 on a sport wheel chair, the kind used for track or basketball, the wheels are angled, he was gloved as he sped the wheels down the hill and passed me, this was the first time I had seen this man and as I watched him go down the hill and check the 4 way stop intersection and pass through without stopping, then aim at an access corner and pass an ill placed dumpster at something like 25 mph I thought he’s either foolish or really good with that thing… I hope he doesn’t go to my stop. The stop is by the Mission, usually quite a bit of dysfunction there, through the years, the Missions reputation has had its up and downs, I give them kudos for hanging in there and doing what they can.

Earlier in the week, at the corner of 3rd and Pike as I loaded Orca cards, across the street from me, a young blond girl that seemed too skinny, struggled while walking with her 2 pair of shoes, her lace up heals wrapped around tight jeans, with the heals sideways dragging on the street to the outside of each foot wearing tennis shoes, ever see that video of the husky wearing shoes? This is how she moved.
Behind her, an older man in at least his 70’s , long hair and long beard, worn jeans that sagged way down, not so whitey tidies……. He was bent forward with his butt against the building, rubbing it up and down, drooling, He had a white T shirt that appeared to not have been laundered for a while.
The blond started to cross the street towards us, buses slowed and let her go, her movements were reptilian. Think of the Chicken picking its way through the yard. She reached our stop and as people were moving out of her way and looking anywhere else, she arrived at the solar powered trash compactor, there were a couple of donuts laying at the foot of it, sun dried and pecked by pigeons then left in a crumbly pile, she reached down and broke off a piece and pecked at what she had, her blankness expression was breath taking, she then headed north up the street.
Back at the Stop by the Mission, I pulled in and indeed the Young Asian male was there waiting, as I opened my doors he ordered, “ I don’t need the ramp, just lower, and stay in your seat…. You drive, I’ll take care of myself” I wasn’t sure at first how to react, I was concerned about not lowering the ramp as there might be some law or regulation that would put my job at risk… I decided to pay him the respect and not lower the ramp. I tilted the bus anticipating what he might do. I was just a couple inches above the curb, he tilted his chair back and pushed/hopped into the bus, handled the corner, tilted back the chairs and strapped his chair in…. 2 or 3 times quicker than I had seen it done before. I raised the bus and pulled out.
I saw him again today, same stop, he hopped on secured himself in, when we reached his stop a West Seattle Library, I lowered the bus and he hopped off and said “ have a good day bro” “enjoy the weather” I replied as I closed the doors.