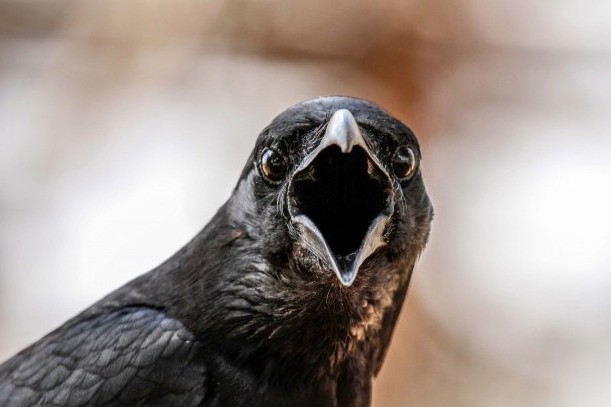 The Firm I was working for was building a house in the Bellevue area.

I was the project manager for this one, so found myself at the construction site rather often as we were removing some walls and adding a couple rooms.

It was late Spring the walls had been framed so I could take measurements for some flooring as well as a few other items.

I was checking in with the contractor when he told me that the crew was being harassed by a crow.  As they worked the crow would dive at them, land nearby and caw at them.  It was bad enough a couple of the crew had decided to work elsewhere.

I was doing some measuring when the Crow started flying around. I didn’t sense that the crow was dangerous, so I stood there with my arm out for him (or her) to land on as he flew at me.

He did land, started talking to me rather seriously, I let him crawl to my shoulder and decided Id finish what I was doing, and he would fly away.

I finished up, the contractor said, “probably not a good idea man” He seems fine I said, opening my door and expecting the crow to leave. He stayed on my shoulder, I opened my windows and started my car, expecting him to leave, he just pruned and looked around my car.

I didn’t know what else to do, so I opened the passenger window and started to drive slowly down the road, expecting him to fly away, he did not.  I got to the freeway; told him it would be his last chance until I get across the 520 bridge.  He stayed as I rolled up the windows (I thought he might get hurt if he tried to fly out at 55mph) He was fine as I drove home and into my parking spot.  I unloaded my stuff with him on my shoulder, opened the apartment door, expecting him to leave, he did not.

I walked down the hallway to my apartment, opened my door, Kaylar (my cat) took one look at our guest, wanted no part of this and dove under the bed. I dropped my stuff in the entry, walked to my slider that opens to the back yard, opened it, expected him to leave, he did not.

I used the restroom with him on my shoulder, he seemed unmoved.

I went back outside and told him he really should go…he can hang out here, that would be cool but I can’t keep him inside with Kaylar.

He flew to the tree by my window, seemed to sniff the air getting his bearings, he focused on the direction of the house from where we met.

He cawed, flew back in that direction.

I never saw him again