I was sitting in her Living room interviewing for the position, I was looking at a number of beautiful antiques…… 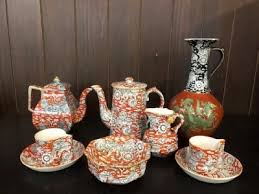 My first real career was an Interior Designer.  I struggled to understand the concept of designing for others, as in some way’s it’s an extreme invasion privacy.  A designer’s mission is to fully understand the clients esthetic tastes then somehow turn it into the home of their dreams.

Learning about them is what I struggled with, until I met Mrs. Furbush.

I was sitting in her Living room interviewing for the position, I was looking at a number of beautiful antiques, art, Knick knacks and asked her, “what is your favorite piece”?  She told me about a chair she would read stories to her now grown daughter, a table where her son fixated on studying… a Lamp her husbands mother had, then her eyes lit as she talked about her Grandmothers Tea Set.  Her and Grandmother drank tea together from this set ( what’s left of it) and later she inherited it and used it almost everyday…. “ I used this during the war she said.  I was an actress in London at the time of the bombing, one night during a performance, the bombs were shaking the building, several chandeliers and tiles fell, we kept the play going. Afterwards when I came back to my dressing room a number of things were destroyed by fallen tiles, but this tea set survived.” She had tears in her eyes.  I felt the moment with her, then we talked about how we could design the condo around the tea cup, pull the colors onto the walls, use a similar pattern on the drapery, paint one of the scenes (deer) onto the fireplace.

So much happened during this project, we became great friends and the project was one of my best because it was so personal, every item and color had purpose.

I began to piece it all together, the items we have, we wear are stories about us.

I had spent many hours at airports, shopping malls, walking the streets observing people, 7 years at an Art School, but it took Mrs. Furbush to bring the attention of all the symbolism we carry in our lives.

In my mind now possessions are not shallow things, we like items for a reason, and that reason my have historical significance to it. Money doesn’t matter in all this, my most precious item is a Christmas ornament that is from my fathers first Christmas of 1921. Glass bird, worn out, thin, missing feathers for its tail, but I cherish it for all the reasons you can imagine and cannot.

Not long ago, a woman boarded my bus, she was holding a sweater to her face and crying into it. She struggled to sit at the front.  I didn’t have many people, Mam, are you ok?  She spoke in broken Latino English, my mammy just died, they just told me, she sobbed, broken, unashamed about her state in front of strangers, This is all I have of hers, she lives away, she cried. An older woman sitting across from her moved to sit next to her, put her arms around her and held her as she cried.

I felt the pain as I pulled away and across the West Seattle Freeway bridge.  I thought of my moms death and fought the tears that all of us were fighting.  The woman hugged the woman next to her, left our bus a few miles later, able to walk and breath.

It was an old sweater, worn and not many would consider it pretty… to the woman who just lost her mom, it meant her childhood, her family, it was everything she sees the world through.  It is irreplaceable.

The next day was the beginning of my weekend.  I have teacups that belonged to my mother and grandmother.

I made tea that morning…. I thought of Mrs. Furbush, my Mother, my Grandmother.